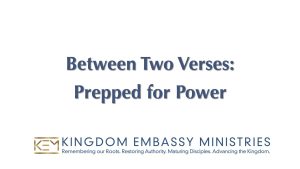 There is no doubt in my mind that we live in one of the most important prophetic times in history. I am sure many men over the centuries have made that claim, but if I had to make my argument for the case I would say we are at the crossroads for two massive reasons. In the United States and by extension globally, because of the position the U.S. holds in the world, we have come to this great divide.

On one side we have those who will boldly proclaim that there is One God, and that He has revealed His image to us, first in Genesis when He made man and woman in His image, told them to marry and to be fruitful as a family, and then again He revealed Himself through His One and only Son.

On the other side we have bold declarations that gender is fluid, and therefore there is no definitive distinction between a man or a woman. Marriage is irrelevant and certainly, even if considered, is not reserved for the union of a man and a woman, which of course has redefined the family. And then there is the assault on being fruitful, with the mass annihilation of the unborn child. These violations add up to the very denial of His image.

Then we have the people of God, Israel, throughout history, with a reputation of killing the prophets. When the conviction of their words reached Israel, in many cases, instead of repenting, they simply killed the messenger. Today, in the church we have done much the same. The Church was originally established on the Apostles and Prophets with Christ as the Chief Cornerstone, and yet today, the church is run by Pastors only, with almost zero Prophetic oversight. This has yielded a divided church with minimal power in the world. The Prophetic authority must come back into the church to re-establish the Separation of Powers needed for the Body of Christ to finish what we are here to do.

At present, the Supreme Court of the United States is about to make a choice whether to intervene in the 2020 presidential election or not! The Separation of Powers in our government (three branches) was modeled after the Scriptures, the King, the Priest, and the Prophet. Today in the church that would translate to the King of Kings, the Pastoral, and the Prophetic. In government, the King is the Executive Branch, the Priest is the Legislative Branch, and the Prophetic is the Judicial Branch. The Supreme Court will either fulfill its Prophetic duty or it will not. Either way, you, the church must be ready! Are you ready? Today’s teaching will help you prepare to see with prophetic eyes.