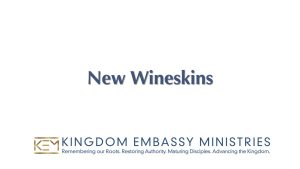 It would seem that in creation mankind was clothed only in the skin on his body and in that form he reflected the glory of God. Something happened when sin came into the world. He looked upon the glory of his own body, and instead of seeing the glory of God, he became afraid and attempted to cover what he now saw as “nakedness.” What took place next has great prophetic significance. God saw man’s new sense of embarrassment over his original glory and accommodated him by causing him to be covered with a “new skin”, an animal skin, a certain downgrade.

This downgrade would now plague mankind into the future and does not seem to have a complete resolution until the revealing of the sons of God, at which time “creation is restored.” Our ultimate hope is to be clothed with a restored heavenly image so we shall not be found naked, like Adam.

The theme of being clothed in either sin and shame or glory and righteousness, is something that is well-defined in the life of Joseph. And we will see the exact pattern in the life of every believer as he is sanctified from glory to glory. And putting on a new skin that reflects this glory is something that our Savior taught about in a short parable: “No one puts new wine into old wineskins; or else the new wine will burst the wineskins and be spilled, and the wineskins will be ruined. But new wine must be put into new wineskins, and both are preserved.” Time to put on your new wineskin!