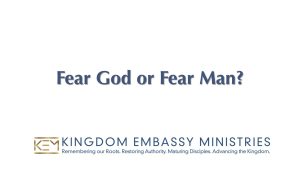 We are living in a time in which governments are behaving more and more as if they are God. In truth, if we pay close attention, we can see that they continually devise ways, like in the days of old, when kings and magistrates DEMANDED worship. By force, either by written or oral decree, kings would require allegiance to themselves, instead of the God in whom the people believed, the God in whom they preferred to serve and worship. While we are yet to see such ultimatums, “Worship the king or die!” the time may not be too far off. Many indicators point to a day quickly approaching when believers will be forced to privatize their worship in order to exercise any worship at all. May it always be said of us, those who identify as the children of the one and only Most High God, that we would fear God instead of man!

We have already witnessed business owners being persecuted and sued, and some businesses caused to shut down, for not providing services they deem to violate their closely held religious convictions. Legal battles have ensued over religious liberties between establishments and the government. Secular authorities’ attempt to impose cooperation with same-sex unions and late-term abortions. And this year, under the guise of pandemic restrictions, they have even forced the closure of Churches throughout the nation. The list of issues against the believer is long and growing every day.

It’s time to take the gloves off! Who do you Fear; do you Fear God or do you fear man? Ultimately, government bureaucrats are pushing to create a godless society at the behest of a sin-riddled world. We are living in a postmodern, pluralistic society in which people are being indoctrinated to believe there is no ultimate source of truth. As such, there is no ultimate source of morality, and at the very core, they’d like you to believe that we owe allegiance for who we are and to what we can aspire, to their very rulership. I don’t know about you, but I can’t vote for that!