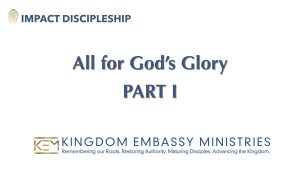 Reminder on Chapter 4 what Peter means when it begins with therefore: “For Christ also suffered once for sins, the just for the unjust, that He might bring us to God, being put to death in the flesh but made alive by the Spirit,” I Peter 3:18 NKJV

Enough with the Ways of the Gentiles
“Therefore, since Christ suffered for us in the flesh, arm yourselves also with the same mind, for he who has suffered in the flesh has ceased from sin, that he no longer should live the rest of his time in the flesh for the lusts of men, but for the will of God. For we have spent enough of our past lifetime in doing the will of the Gentiles— when we walked in lewdness, lusts, drunkenness, revelries, drinking parties, and abominable idolatries. In regard to these, they think it strange that you do not run with them in the same flood of dissipation, speaking evil of you. They will give an account to Him who is ready to judge the living and the dead. For this reason the gospel was preached also to those who are dead, that they might be judged according to men in the flesh, but live according to God in the spirit.” I Peter 4:1-6 NKJV