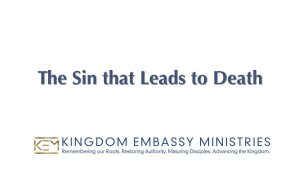 We are called to love and pray for our enemies—a high calling indeed. But, are we called to do the same for Yahweh’s enemies? I think the answer is certain; we are not to pray FOR them but ABOUT them! But, what about them?

There is no doubt that the line a man crosses to the place of no return is difficult to understand, but let there be NO DOUBT that such a line exists. In the Old Testament the line was demarcated with a public voluntary commitment to worship Yahweh and crossed when returning to worship other gods, yet insisting that it was okay to do so, and having total peace about it. Joshua called it a “witness against yourself.” I don’t believe this included ignorance or accidents or self-deception. It seems to be a moment of knowing and yet still purposely doing so. In the New Testament it is simply referred to as blasphemy of the Holy Spirit, or grieving the Holy Spirit, or the sin that leads to death for which no amount of prayer can remedy.

God calls these line-crossers wicked; they hate Him and have become His enemies. As such, let us agree that all sorts of curses and destruction are coming upon these enemies of His. And we need not identify those who today hold this dreadful title because they are perfectly capable of identifying themselves. They arrogantly raise their hands and openly declare, “Pick me, pick me, pick me!” They place their hand upon God’s Holy Writ and make promises while they aspire to evil and boldly stand for beliefs and practices which Yahweh calls abominations. They openly declare by their proclamations and actions that “There is no God!” Yes, they arrogantly live lives filled with sin that leads to death. Yes, we must pray, not for THEM, but instead ABOUT them. It’s a simple prayer. Father, please show the world Your vengeance against those who hate You!