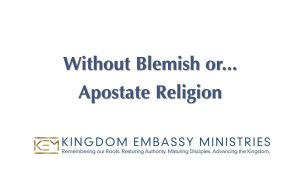 Time and again we read in the Old Testament how Yahweh insists that the offerings brought before Him be spotless, “without blemish.” In the New Testament the sacrifice is to be holy, acceptable, and the perfect will of God. Yes, Paul calls us to give our lives as spotless living sacrifices in the same way those animals were offered without blemish.

As a point of fact, all throughout the New Testament we are called to live blameless lives, without spot or wrinkle. Ah yes, the ever-repeating patterns in the Scriptures. God’s insistence on the perfect sacrifice was always pointing ahead to His spotless bride. And yes, another pattern shows us what it looks like when rebellion is afoot. Instead of a lamb without blemish, lets go ahead and offer blind and lame animals, or worse yet, stolen animals. Can you imagine how far from God you must be to think you can offer Him a sacrifice that you heisted? It’s preposterous! In the New Testament, these apostates are called “spots in our love feasts.” Today they don’t look like Christians dragging lame or stolen animals before the Lord; instead, it’s a whole movement of people who call themselves Christians, while they remain fully entrenched in the world.

The prophet Amos called them out like this: “Woe to you who desire the day of the LORD! …Is not the day of the LORD darkness, and not light? Is it not very dark, with no brightness in it? I hate, I despise your feast days, and I do not savor your sacred assemblies.” Which side best represents you; the spotless bride or the stolen blind animal?