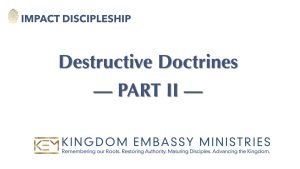 The Doom for False Teachers
“For if God did not spare the angels who sinned, but cast them down to hell and delivered them into chains of darkness, to be reserved for judgment; and did not spare the ancient world, but saved Noah, one of eight people, a preacher of righteousness, bringing in the flood on the world of the ungodly; and turning the cities of Sodom and Gomorrah into ashes, condemned them to destruction, making them an example to those who afterward would live ungodly; and delivered righteous Lot, who was oppressed by the filthy conduct of the wicked (for that righteous man, dwelling among them, tormented his righteous soul from day to day by seeing and hearing their lawless deeds)— then the Lord knows how to deliver the godly out of temptations and to reserve the unjust under punishment for the day of judgment, and especially those who walk according to the flesh in the lust of uncleanness and despise authority. They are presumptuous, self-willed. They are not afraid to speak evil of dignitaries, whereas angels, who are greater in power and might, do not bring a reviling accusation against them before the Lord.” II Peter 2:4-11 NKJV