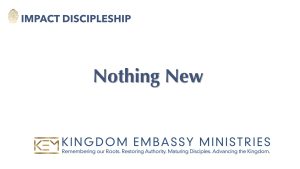 “Brethren, I write no new commandment to you, but an old commandment which you have had from the beginning. The old commandment is the word which you heard from the beginning. Again, a new commandment I write to you, which thing is true in Him and in you, because the darkness is passing away, and the true light is already shining. He who says he is in the light, and hates his brother, is in darkness until now. He who loves his brother abides in the light, and there is no cause for stumbling in him. But he who hates his brother is in darkness and walks in darkness, and does not know where he is going, because the has blinded his eyes.” I John 2:7-11 NKJV