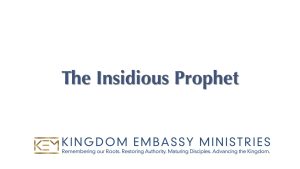 On June 23rd, 2003, I walked down to the pulpit to receive Salvation. I remember that moment as if two minutes ago. The evening prior to my born-again experience, I had an encounter with an older gentleman who challenged me with a handful of questions regarding my eternity. I had very weak answers, if any at all, mostly in the form of questions. I recall waking the next morning as if I had been in a boxing ring for ten rounds with Mike Tyson. One thing was evidently clear that morning; I knew something was off and I could not shake it. I had to get to know the character of the God to whom this gentleman was referring.

I recall growing up as a Catholic and my view of God was one of intimidating fear, and I believed that God was confined either within the walls of the Church or in Heaven. I feared that if I stepped out of line, He could, at any moment, strike me with lightning and finish me off. I retell this, not to bring attention to my life, but to introduce today’s character, the insidious prophet, Balaam.

Balaam had a similar problem, his view of Yahweh was also very wrong! He thought that Yahweh was malleable, one who could be bribed or tempted. Balaam believed that he could convince God to change His mind, to break His own Abrahamic covenant and to, instead, fulfill Balaam’s own greedy desires. Boy was he wrong!