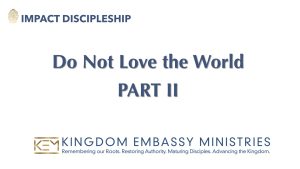 Deception
“Little children, it is the last hour; and as you have heard that the Antichrist is coming, even now many antichrists have come, by which we know that it is the last hour. They went out from us, but they were not of us; for if they had been of us, they would have continued with us; but they went out that they might be made manifest, that none of them were of us. But you have an anointing from the Holy One, and you know all things. I have not written to you because you do not know the truth, but because you know it, and that no lie is of the truth. Who is a liar but he who denies that Jesus is the Christ? He is antichrist who denies the Father and the Son. Whoever denies the Son does not have the Father either; he who acknowledges the Son has the Father also.” I John 2:18-23 NKJV