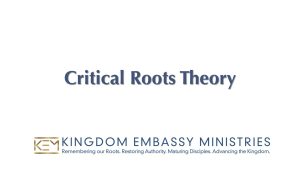 I called this teaching “Critical Roots Theory”, obviously to play off the controversial Critical Race Theory. I would venture to say that regarding the latter there is so much that you don’t know that you don’t know about it. It’s much like that beacon of light movement call “Something” Lives Matter. I am purposely leaving out the proper name as to not be censored. But, you all know that to which I am referring. That organization cares about anything other than that for which it is named. Nevertheless, most people don’t even know that, nor do they know that they don’t know that.

And that leads us to our current topic at hand. You may not actually know the Hebrew roots of your faith, and you may have not even realized you don’t know them. Moses looked forward and said it like this. “This covenant that was made between you and Yahweh, it’s not just for you. It is also for everyone who will come after you.” That’s a powerful idea. Y’shua made a similar promise at His last meal before He was crucified. “My prayers today are for all these men sitting before Me, as well as all those who will come to faith because of what they are about to bring into the world.”

There is an unbroken link between Christians today, and those who came before us, all the way back to Abraham. Paul even told the Corinthians that all of their forefathers passed through the sea, even though they were clearly of Greek origin and not Hebrews. What connected them? And why is it appropriate to say we are all from the same root? Did you even know we were; or better yet, did you even know that you didn’t know how critical it was that you should know? And more so, what controversies have arisen over the centuries because of this ignorance? Hence, “Critical Roots Theory.”