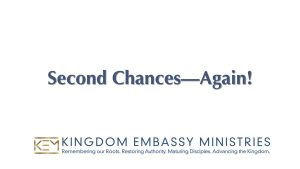 You can review the video on Second Chances from Last year’s Torah Cycle as this year it is skipped because the Feast Portion for The Feast of Tabernacles is in its place.

Everyone wants a second chance. The question is, what will you do with yours. The first time Israel arrived at the shore of the Jordan, one year after they left Egypt, they made horrible choices. The second time, 39 years later, they were given a second chance. As they prepared to enter, Moses reminded them that they have the words and laws of their Heavenly Father as a heritage. Many years later we see King Hezekiah, who also gets a second chance in life.

He knows the reason is so he can make the truth of His Heavenly Father known to the children. And you are the child of God with the heritage of Yahweh’s words, His laws, and His truths, and you were given a second chance. What will you do with it?