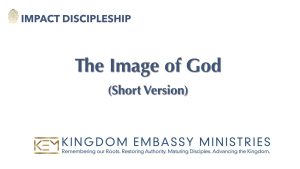 Yahweh, our Creator, desired that we know Him so He created humanity “in His Image”. First He created Adam, who we now know had both male and female DNA. All men do! Then He “extracted” the woman from Adam so we could see a man and a woman separately with all their distinct characteristics. He looked at them and said, “This is My image.” To further clarify, He commanded that they marry and be fruitful and multiply, thus completing the family—the perfect image of the Creator Himself. We learn that God is a Divine Family, the Father, Spirit and Son, and so His expressed image needed to be represented by all the distinct parts of a family. Thus, the human family, a father as the husband, a mother as the wife, and the child as the fruit of their love.

When you contemplate the existential crisis of our day, you can simplify it with two opposing viewpoints. One stance says men and women are distinct and definitive, marriage is a holy union between them, and that children are the blessed fruit of that union. The other stance says gender is a social construct and there has never been a distinction between a man and a woman, nor is gender limited to male or female. A person is born as one gender, both genders, or neither. Marriage is unnecessary, or if desired, may take place between any genders or no genders at all. And of course, the unborn child is the fruit of nothing, is not even human or alive, and has no rights to live, other than what the person carrying that lump of cells permits.

Think about it! One side believes in the family, as God presents it to us, as His image. The other has rejected all aspects of the family, and by inference has rejected the image of God Himself. In other words, there is no God! Could opposing positions be any more contrary to one another?

The destruction of the family is the enemy’s chief strategy and the restoration of the family to the image of our Creator is the most important work on earth today. When we do that, only then will the Kingdom come on earth as it is in heaven.