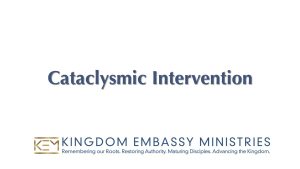 Are you contemplating the significance of the days in which we live? Given the events of the last 18 months and counting, you could be questioning things more now than at any other time in your life.

As history rushes headlong into what Christendom calls the last days, do you understand what Y’shua meant when He said, “just as in the days of Noah”? Speaking to His disciples, Y’shua pointed to how Noah was warned of Yahweh’s impending Cataclysmic Intervention in His creation, aimed at cleansing evil from the face the earth.

Anyone who has ever been to Church service, even a handful of times, has heard of Noah and his famous Ark. Why did Yahweh command him to build it? What exactly was going on at the time of Noah, and what was Y’shua warning about our future? Make no mistake my dear brothers and sisters, while Yahweh promised to never bring destruction through water again, He did promise another Cataclysmic Intervention. “Just as in the days of Noah” and the “Days of Lot”…”so will it be when the Son of Man is revealed.”