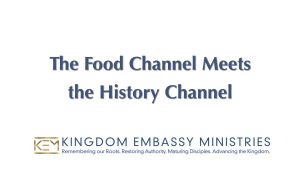 There is so much diversity in Christianity across the globe and other than agreement on the cross, there seems to be no particular doctrine that is universally held as true in all denominations. Of course, the cross of Christ unites us; it’s simple, if you don’t believe in the cross, then you are not even a Christian. Beyond that, everything appears to goes haywire.

There is one other commonly held belief that has gained almost universal traction in Christianity, however. It’s not one that threatens your eternity of course, but adherence to it seems to be as dogmatic as the cross itself. No, it will not threaten your eternity, but getting it wrong might make you arrive there a whole lot sooner. Interview your Christian family, friends, and neighbors. Find a diversity of denominations to survey, so you can obtain a good cross section of tightly held Christian beliefs. And do you know what you will discover? “Don’t mess with my food!”

It’s true; Christians will choose common culture over biblical truth almost 100% of the time when it comes to their food choices. In other words, they will choose their taste buds and addictions over biblically kosher every time. Now, we can spend an eternity (pun intended) talking about the myriads of unnatural man-made junk foods you should not eat (what I call common sense kosher), but we won’t go there for now. Instead, I want to make it simple. I just want to explore what the Bible says you are permitted to eat (what I call biblically kosher) and how Christians worldwide, and across nearly all denominations, believe that the cross of Christ annulled God’s laws on food, and how that is simply not true.

Yes, Christians universally agree on two things; the cross has set them free for eternity, and has also freed them to eat whatever they wish. The first will save your life; the latter will kill you!