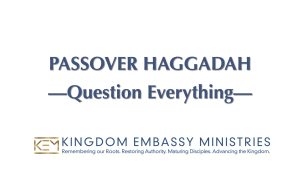 The Haggadah—the Telling
When your children ask, what will you tell them? What happens when an entire generation separates from its roots, forgets their heritage, and has no recollection from where they came? Yahweh built reminders into the culture of His people to deter that from happening, but unfortunately it has. God’s people disconnected from the original roots of their faith, surrendered to common culture, and adopted the traditions of the world around them. In other words, they detached themselves from their true roots and attached themselves to the fake roots of this world.

Do not love the world or the things of the world, John the disciple warned. Are you guilty of committing the same crimes Y’shua accused the religious hypocrites of, in His day, “making the word of God of no effect through your tradition which you have handed down?” I fear, if asked, like those religious hypocrites, too many Christians could offer no defense!

“How so?” you might be thinking. Look around, especially during the holiday seasons, and you will see the majority of Christians flocking to celebrate manmade holidays, steeped in pagan traditions. But when their children ask, “What do you mean by this service?” Or, “What is the meaning of the testimonies, the statutes, and the judgments which the Lord our God has commanded you?” Or, “What do these stones mean to you?” They will have no biblical answer because they have been carried away in “making the word of God of no effect through their tradition which they have now handed down to their children.”

It’s sad that if Y’shua was walking the earth today, He’d be asking the same question of religious leaders that He did two thousand years ago. “Why do you also transgress the commandment of God because of your tradition?” John warned us about loving the things of the world, “the lust of the flesh, the lust of the eyes, and the pride of life…” May we, as the Body of Christ, run from such things. And the next time your children ask, this is what you will answer; “It’s the Passover; we were slaves and now we are free; let your children tell their children, and their children the next generation. It is a memorial forever.”

Or, you can say, “Go find your painted eggs and chocolate Easter bunnies. Fill your baskets; this is now how we remember the death, burial and resurrection of our blessed Savior.” It’s sad we have fallen so far. I don’t know about you, “But as for me and my house, we will serve Yahweh!”