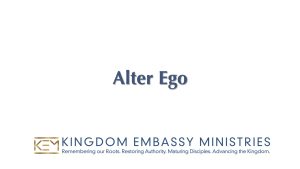 Two identical goats are selected on Yom Kippur to be considered for the atoning sacrifice for the sins of the people. Soon after, one goat becomes that sin offering. It’s easy to see the shed blood of Christ in the imagery of this sacrificial goat. “And He Himself is the atoning sacrifice for our sins, and not for ours only but also for the whole world.” And the other, the scapegoat, is set loose, freed into the wilderness, kept alive for another purpose. Who does the imagery of this scapegoat represent?

Y’shua prophesied of a type of “identical goat” in His last sermon before He was arrested; “As You sent Me into the world, I also have sent them into the world.” There He was; about to cover the sins of the world with His blood. But also, right in front of Him was another image. It looked exactly like Him. Yet, this one sheds no blood and is instead sent off into the wilderness. Why?

The prophetic revelation is crowning with imminent birth. One sheds His blood as the atoning sacrifice for the sins of the whole world—that’s Christ. The other, created in the same image, is sent off into the wilderness carrying an assignment. Who is being transformed into the image and stature of Christ, and what is his assignment in the wilderness? It’s impossible to ignore Isaiah’s words in search of an answer. “In the wilderness prepare the way for the Lord; make straight in the desert a highway for our God.”

Isaiah identified the assignment, and Y’shua identified the image of His identical goat. “The glory which You gave Me I have given them, that they may be one just as We are one: I in them, and You in Me; that they may be made perfect in one.” We are to be perfect in one with Christ, His identical image, His alter ego. An alter ego is another version of oneself, a person who behaves so similarly to another that the difference is unrecognizable. Are you one with Christ, indistinguishable from Him, His alter ego, His scapegoat? He promised we’d do greater things, be His ambassadors through whom He is pleading? He is finished for now; it’s time to complete your assignment. Are you ready? “Go therefore!”