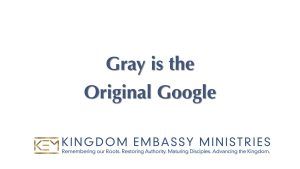 Oh my how things have changed. Many cultures have shifted away from venerating their aged population, and moved toward esteem for their young. We have become child-centric with the vast majority of our attention invested in the activities, opinions, interests and desires of youth.

Yet, the Scriptures paint a very different priority. God’s word demands that considerably more emphasis be placed on the gray-headed generation. And it becomes strikingly obvious that this attention is not simply because they need to be provided for in their old age. Rather, it is a directive to revere the older generation with such honor, as if their silver locks were a crown of glory.

That’s right, the gray hair that adorns the heads of our elders is likened to wisdom and understanding, a crown of glory if it is found atop those practicing righteousness. But instead, the superficiality of today’s common culture has inspired our sages to cover up the “splendor of old age” with dyes and treatments.

Somehow we have descended into the “me generation.” This is a whole crop of entitled young people who can’t resist “selfie everything.” Every Instagram post, every complaining Tweet, every silly TikTok, and practically every photo opportunity is about self. As such, it should be no surprise that they’ve left behind the connection to and reverence for the silver generation. It has rapidly declined into the practice of, “ask Google everything and let the wisdom of a dying age die with them.”

It used to be we would sit at the feet of our elders, gleaning their wisdom and advice; they are the original Google. If you needed to know something, anything, they are where you searched. Remember those who came before you, who have spoken the word of God to you, whose faith you should emulate, as you consider the years of experience resulting in what you see in them. The things which you learned and received and heard and saw in them, these things learn from them and do. Let us never forget how the Scriptures equate the gray hair of the aged to the wisdom of the ages! Your life just might depend on it; Solomon thought so! “The way of life winds upward for the wise, that he may turn away from hell below.”