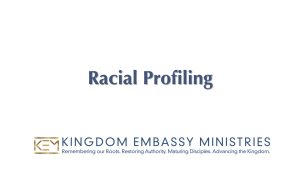 It’s about to get controversial. But, that should not come as a surprise, because God is not bound by what feckless political hacks call inclusion. If you demand that the Creator of the universe operate in equity, then I have some disturbing news for you; we all deserve to burn! Let me be clear about what is meant by equity: the quality of being fair and impartial. I’m not sorry if this makes you uncomfortable. Yahweh’s version of fair and impartial must include justice. You see, a just God who operates in equity must exact punishment on everyone equally. This, of course, is true unless He allows a third party to be inserted into the equation to cover the cost for some!

Some! How is that equitable? This is where the examination of inclusivity enters and is likely what will disturb you most. If Yahweh was all-inclusive, He’d not favor any particular person or group. Yet, it is clear that He does: some get His name… some are special… some get double… some are chosen… some are above… some get blessed… He identifies, isolates, and then closely examines some. He treats them differently by offering them a unique opportunity. Should they accept, they are given special privileges. Some and not others? Yikes! God is guilty of racial profiling. His version of equity has an exclusivity clause—some and not others. Report that in today’s “woke media” and you will witness the colossal character assassination of Yahweh. Let the indictment of the Judeo-Christian God begin!

Can you imagine the arrogance, the gaul, the utter absurdity? Mankind with his modern institutions and mores decides, using his own set of standards and beliefs, if the Creator of the universe is right or wrong. Let that sink in! I pray you are not fooled by the relative morality of the day. A culture of virtue is not defined by people. Virtue is simply, and in its purest form, defined by God. Yahweh decides what is good and right! That is reality.

If you don’t like it; if you disagree with God, that He chooses some and not others, His use of racial profiling, take it up with Him. Be warned however; every example of every pious, self-righteous boob, who ever challenged God’s right to make His own rules and standards, regretted his decision. What makes you think it will be different with you?