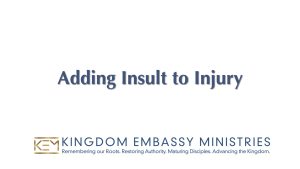 Picture this in your mind. You’ve already made a bad choice that is sure to have dire consequences. It may even be such that everything about your bad decision is out in the open already, and you are certain of the negative ramifications. What now?

As a parent, I’ve always taught my children that it will go much better for them every time, if they quickly acknowledge their poor choice, admit what they did was wrong, and graciously accept the appropriate punishment. They were well-educated about how much more unpleasant it would be if they did or said anything to make a bad situation even worse. “Don’t add insult to injury” is one way to describe my advice.

There is no doubt in my mind that this aspect of human nature, the sin nature, is one of the main themes that circles back over and over again in God’s Word. Paul said it like this; “I am carnal, sold under sin.” But he also said, “How shall we who died to sin live any longer in it?” It’s bad enough that we see this pattern so often: sin—warning—intercession—penalty—repentance— forgiveness. But it makes matters so much worse, exponentially worse, if we insert another step between penalty and repentance! I am confident you would like to know what that is, hopefully to avoid making that critical error yourself.

It starts with not liking the penalty. “News alert! Not liking it is what makes it a penalty.” So, the human brain gets scheming. “I’ll take matters into my own hands!” That’s it! As bad as the ramifications for your sin might be, inserting that step, taking matters into your own hands, will make things exponentially worse!

We might say, “adding insult to injury” is a modern euphemism. A euphemism is a mild alternative, an understatement, or indirect word or expression substituted for one considered to be too harsh or blunt, when referring to something unpleasant or embarrassing. Another euphemism I am sure you are familiar with is, “Two wrongs don’t make a right!” When you take matters into your own hands that is exactly what you are doing; you are stacking a new wrong on top of an existing wrong! Now, let’s dive a little deeper into what that looks like biblically.

God’s words equates disobedience to unbelief, or a lack of faith. If I were to use the opposite of a euphemism, what is instead a dysphemism, and call a spade a spade, I’d rephrase “Don’t add insult to injury,” bluntly and with harsher terms like this; “Don’t add rebellion to unbelief!” Taking matters into your own hands to avoid the consequences for your sin is really the quintessential example of “adding insult to injury or adding rebellion to unbelief.” I have a secret for you that will change your life… “Don’t do that!”