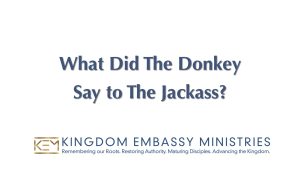 It’s actually hilarious when you think about it. Let me set the scene. You are so obstinate, so out of touch with reality, so absolutely wrong—and yet you are totally clueless! You have not even reached the starting line of “getting a clue!” I can think of so many idioms that describe this mental condition…

“You couldn’t be more wrong.”
“It’s like the blind leading the blind.”
“We’re not even on the same page.”
“It’s like you’re dead from the neck up.”
“You’re as dumb as a post.”
“You’re not playing with a full deck.”
“You’re one sandwich short of a picnic.”

And after you have demonstrated the befuddling capacity to be consistently wrong and clueless at the same time, it can only get worse if you verbally insist that it’s not you, but others who drown in delusion. “Well, isn’t that the pot calling the kettle black?” to frame yet another idiom. In the end, there is a way to know who is right and we can use one final idiom as evidence. “The proof is in the pudding.” Yes, the truth of a thing is obvious from the results of the thing! Now, let’s witness this cluelessness in action in the Scriptures. Get ready to laugh—or cry, if unfortunately this describes you.

Did you ever read the story in the Bible where the prophet of God becomes the wannabe-relevant-prophet-to-the-stars? This defector becomes so out of touch with God that the donkey he is riding has to: first turn off the path; then resort to crushing his foot against a retaining wall to get his attention; only to follow by simply laying down, as to not move forward one more inch. You’d think this pseudo-man-of-god would get the message. Nope! He just beats the messenger to carry on.

Finally, he discovers that his dumb ass is not so dumb after all, as she blurts out a few choice words. Okay, lets really consider what’s going on here. How would you react? First, you would be in utter shock and amazement that the mute beast suddenly spoke, no? I think we can universally agree on this. Certainly you wouldn’t just start conversing with the animal, as if this is totally normal. Would you engage in a conversation? Would you carry on as if this was typical? More so, would you try to reason, or better yet, argue with the four legged creature?

It’s stunning as you read the narrative. But maybe if we take another perspective it will seem a bit less distressing. Maybe the talking female donkey is not speaking human at all. Maybe the man upon her back has instead descended into thinking like a jackass (a male donkey) and it’s the female donkey who should be shocked that her once human passenger has become nothing more than a stupid beast.

Here is the takeaway and Moses said it best; “Don’t bless yourself and say, ‘I shall have peace, even though I follow the dictates of my heart—as though the drunkard could be included with the sober.’” Don’t descend into such a place of blindness and depravity that you begin to think like an animal! In other words, don’t become a jackass who is forced to converse with donkeys.