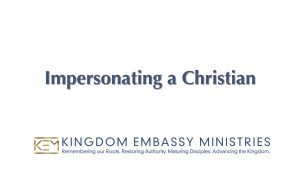 It can be very funny to watch a talented comedian do impersonations. They are skilled at capturing the essence of someone who most people would recognize. They accentuate their mannerisms, facial expressions, voice, body language and talk about subjects this famous person is known for. They truly capture the outer expression of a person’s character. It might be said that imitation is a great compliment. Of course, this is true if it is all done in clean fun, as the Bible warns us against course jesting.

.Yet, it is far from funny and rather offensive, even dangerous, when we find someone impersonating a Christian. What does that even look like? Too often, you cannot easily identify such “comedians” simply by their mannerisms, facial expressions, voice, body language or the subjects they talk about. Those all appear authentic. But it’s their inner character that ultimately exposes them. Out in the open they appear as Christians, but in the secret place of the heart they are just frauds.

I’d invite you to use a few key parameters and see if you can spot them. They are much more popular than you might think; they are actually everywhere, lurking just below the surface. They love their idols. You’ll notice what’s most important to them on the inside by what gains most of their time, attention, and resources. Another key giveaway is effort. It takes a lot of effort to be accomplished at anything; and you will recognize counterfeits by their cheep imitations; they simply never put God first, never give Him their best of anything. Something else is always more important than God. And we all know that actions speak louder than words, so if you keenly observe what people are doing, you will know. In this high tech world in which we live, virtual reality and social media have become major brands of entertainment. Strap on the headset and dive into a wondrous and expansive fake world.

Fabricate any persona you desire and propagate it on your channels, feeds and posts. People have become experts at fake! Practice your fake Christianity in that world and no one will care; no one gets hurt. But, when you take off the blinders and step back into reality, you will get exposed. The divinely inspired words of the Bible insure you will have no plausible deniability if you say one thing and do another. It’s there in plain sight, so you do not turn aside from God’s ways to the right or to the left. “Catch Me If You Can” was a movie released in 2002 in which the main character successfully performs all sorts of cons. He convinces everyone that he is someone else, someone he’s not. He is a great impersonator, an imposter. It seems like an exciting ride all along, but deep inside he is actually tormented by his true identity. In the end, all his pretense is exposed anyway. You can’t hide the truth forever! Is that you? Others may not have noticed yet, but deep down inside, you know! Are you impersonating a Christian?