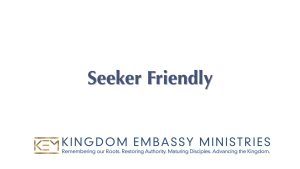 Look what the cat dragged in! Now, I don’t have a cat and maybe you don’t either, but we are all familiar with what that implies. Cats don’t drag into the house anything desirable. Maybe it’s a dead mangled mouse, or a decapitated lacerated lizard, or a limp bleeding bird. Either way it’s a disgusting scene and somebody’s got to clean up the bloody trail.

I guess the picture I wish to paint is that sometimes things are dragged into the house that simply shouldn’t be there. In this case, although it’s nasty, it’s nothing that can’t be remedied without a baby wipe and a little spray disinfectant. And if the bad habit prevails, a trip to the vet for some declawing action and your problem is likely resolved.

But, it gets much more complicated if the feline is instead a Christian, and the house is instead the house of the Lord, and the refuse dragged in is not an unfortunate rodent, reptile, or feathered creature. Christians drag all sorts of nasty refuse into the house of God, His holy sanctuary. They do so and plop it down right under their seats, and it sits there—marinating, fulminating. Many times it goes unnoticed; the feline human has crafted all sorts of diversions from their bloodied dead animals. It’s like someone spraying air freshener in a bathroom just after the most foul deposit. You can’t quite smell the worst of it, but you know something went wrong in there, horribly wrong. Nevertheless, exactly what took place remains hidden, for now. Yes, there are diversions, but if you care to sniff around, you’ll figure it out soon enough.

Other times it’s not so well hidden; sometimes there’s not even an attempt to hide the offending guest below the seat. Maybe this is the worst type of all. It’s the obvious sexual immorality, the idolatry, the slander, the gossip, the greed, the physical and chemical abuse, the unchecked desires, the consumerism, and the preoccupation with selfish gain. Need I continue?

Neither the bearer of such carcasses, nor those sitting nearby, nor the orator in the pulpit cares enough to do anything about it, to even say a word. “They are here aren’t they? And isn’t that good enough; isn’t that the goal; isn’t that what’s most important?” The seat is occupied and the more seats occupied the better job we’re doing filling seats! What does it matter what they dragged in and plopped down below the surface!

Look the other way; no empty seats is the objective here. It’s all about the numbers. It’s the seeker friendly church, and God needs us to compromise in order to find seekers. Evangelism is so much easier when you ignore the sin. So, don’t say a word, the refuse under the seat is fine, as long as they keep coming.