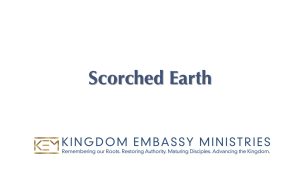 Each week I enter in the same way. I sit to read and contemplate the weekly scriptures and on my heart is one burning desire. “Speak to me Father; show me what You want to teach Your children. Highlight the message in Your Word God.” And then I begin to read. I carefully examine each word, each sentence, each concept, all while asking and listening—“Are these the verses? Is this the message?”

I collect the verses and jot down ideas and themes and cross references that flood my mind. I think about what Y’shua might have taught on the subject and Paul, and the gospel writers, and Peter, and James, and the prophets, and David, and Solomon, etc. It’s a lengthy process; it takes many hours. And, it’s the same every week; it has been since Kingdom Embassy Ministries began in 2019… every week, until this week.

I began by opening the Bible and a blank document side-by-side. I do that every time. But the moment I did that this week, everything changed. Immediately, this overwhelming thought burst into my mind before I could read a single word of the Torah portion. It was like a loud angry scream intruding into my brain, as clear as if God was yelling in my ear. “Scorched earth!” I wrote it down at once, and then I paused to wrestle with what it means.

First I prayed; “Yahweh, is this the message? Is it possible you’ve already revealed what I will find in this week’s reading, before I lay my eyes on a single word?” Even then I did not open the Bible. I sought instead to discover the meaning. “What does scorched earth mean?” I had some ideas swimming around in my head, but wanted to be certain. These were my thoughts. This is what I wrote down in my blank document before I did any additional research:

[1. to absolutely annihilate something, to burn it to the ground, leaving only a pile of ashes, like what God did to Sodom and Gomorrah. 2. what we do to others when we kill them with our words, hurt them so badly that they are too battered and bloodied to even mount any defense. 3. Examples: God went “scorched earth” on Sodom, or Jack went “scorched earth” on his ex-girlfriend.]

What I found upon researching was its literal meaning and a few other applications. We won’t go into all the history behind it; I suggest you do a little searching for yourself and discover the horrors of it all.

[1. Scorched earth is used to describe a military policy in which all the houses, crops, factories, buildings, valuable goods, roads and infrastructure, etc., are utterly destroyed, so that your enemy cannot use them. Anything of any value is obliterated! 2. the act of taking every legal method you have at your disposal to cause maximum disruption to those around you without regard for potential social repercussions. 3. At the end of a relationship and knowing how much you despise the person, you ensure that there is never any hope of getting back together by letting everyone know what that person did to you.]

I wondered…is there any semblance of this concept in this week’s Scripture reading? I wondered, but at the same time I didn’t wonder; I was certain there would be. You come to trust God in these matters after years of hearing His voice and knowing His faithfulness. His word never returns void. Then, I opened the Word of God and this is what I read:

“The Lord would not spare him; for then the anger of the Lord and His jealousy would burn against that man, and every curse that is written in this book would settle on him, and the Lord would blot out his name from under heaven.” (Deut. 29:20)

“The coming generation and the foreigner would say, when they see the plagues of that land and the sicknesses which the Lord has laid on it: ‘The whole land is brimstone, salt, and burning; it is not sown, nor does it bear, nor does any grass grow there, like the overthrow of Sodom and Gomorrah, Admah, and Zeboiim, which the Lord overthrew in His anger and His wrath.’” (Deut. 29:22-23) Scorched earth… need I say more?