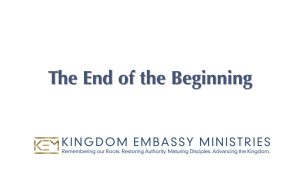 “It’s time to go over the wall.” Those were his words after I explained what had transpired over the past six weeks. The whole thing seemed to climax on the previous Friday night after I presented “Scorched Earth.” And when I woke on Saturday morning it felt like the first day of Summer vacation. The pressure was off and I was relaxed for the first time in more than a month. I instantly had a vision of a sprinter running through the finish line, breaking the tape. “You run through the tape, not to the tape,” I heard. And then the thought settled in, “Now I can slowly glide to a stop over the next few weeks as we complete this year’s cycle, like a sprinter who slows down gently, so he does not hit the wall.” Run through the tape, not to the tape, and then ease up slowly. This is what I thought would happen, until I woke up on Sunday morning. Summer vacation was over.

“It’s time to go over the wall.” My dear brother’s words at dinner that night, just days after my vision of the sprinter, had vibrated my eardrums, but not instantly reached my brain. I shook loose from my momentary vacant stare. “Maybe you have to climb the wall, not stop at the wall.” His clarifying words testified to what I already knew to be true. Between those two moments, the vision Saturday morning and dinner the following Thursday night, I had already composed the first of the final two messages, and there was no indication that anything was slowing down. Naturally, the only possibilities would be to climb over or break through, but stopping at the wall was clearly not an option. Something new was coming!

Friday evening I delivered “Post Mortem Imperative.” Then, Saturday morning God gave me yet another vision, this for the young adult study that morning—W. A. R. (Warring Against Repentance). It’s about the internal war against our own repentance, the craving we have to erase our repentant hearts, just so we can cycle back to our lustful sins—cycle back. I woke again Sunday morning to begin preparation, this time for the final chapter in the saga, this very message. As usual, I had great anticipation that the Lord would speak. Although, I have to admit, what He was about to reveal far exceeded anything I could ever imagine.

This short introduction will not suffice; you will need to listen to the message in its entirety. However, I will say this; the plan of cycling through the Torah portions, year-after-year, ending with Deuteronomy 34 and beginning immediately again with Genesis 1, is a double-edged sword. On one edge, by repeating the cycle we learn to recognize and rehearse the amazing patterns from the Torah that inspire New Testament teachings again and again. And, on the other edge, it seems to have engrained something ominous into mankind’s psyche. Why? Because just when it’s time to cross the Jordan into the Promised Land, we learn to STOP! Go back to the beginning and start all over again.

And isn’t that precisely what all of mankind has done, repeatedly? It’s the story of man: command, fail, repent, forgiven… repeat. What are the possibilities if we just keep going? Instead of Deuteronomy and back to Genesis, let’s march straight ahead into Joshua. Let’s go over the wall! Let’s break free of this earth’s gravitational pull. Gravity is a natural phenomenon by which all things with mass are brought toward one another, the force of attraction between any two masses. One mass is mankind, the other is sin! In other words, we are strongly attracted to the gravitational pull of being a sinful human; but what if we just went forward?

What if we accepted that we are no longer just human? What if we brought an end to the beginning? Let’s dare to cross the finish line, accelerate a little, and scale that wall. What’s on the other side? I think it’s what we’ve all been looking for. Dare we believe? Might we look in the mirror one day and see the glory of the Lord staring back at us? Dare we believe?