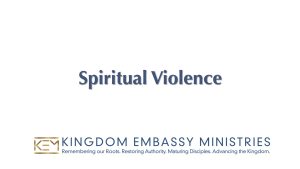 I have no doubt that the words themselves will invoke strong emotions, and you may not like them. They often settle in your soul in a certain place, very likely in the location reserved for where negative feelings go to dwell. The words are ‘violence’ and ‘violent.’ ‘Violence’ describes a type of behavior, often involving physical force intended to hurt, damage, or even kill. It is an unpleasant or destructive force used for intimidation, oftentimes unlawful. Synonyms that describe ‘violent’ include brutal, savage, cruel, sadistic, barbarous, murderous, bloodthirsty, ruthless, inhumane, heartless, and merciless. These certainly reside in the home reserved for negative emotions. Even its antonyms prove where violence undoubtedly lives in your soul: gentleness, kindness, and mildness.

Today, I will also include a few other thoughts to help add to your frame of reference. I wish to reframe violence in your mind, not to eliminate the above, just add to it. And, I’ll use this bible passage to show both sides of the violence coin, how it’s actually a double-edged sword. “THE KINGDOM OF HEAVEN SUFFERS VIOLENCE, AND THE VIOLENT TAKE IT BY FORCE.” How I defined it above certainly conveys the proper understanding of “violence” in this verse; the kingdom of heaven is being violated by destructive forces. But “the violent”, who take it by force, is something different. It best describes the necessary actions of spiritually violent men who MUST use violence to fiercely defend the kingdom against destructive forces, those who also wrestle ferociously to establish the kingdom of heaven on earth. Yes, proper descriptors for these men live in positive emotions territory. Think ferocious, intense, vehement, fervent, ardent, zealous, and fierce. Spiritually fierce men defend the kingdom; ferocious men take the kingdom by force. These warriors protect the kingdom and then overtake it!

How? The Scripture says… by force! What kind of force? It’s not what you think. It’s not brute force. It’s not physical force. It is spiritual force! Sure, at times it appears like fire from heaven; but other times it overcomes the unlawful violence against the kingdom by turning the other cheek. And then there is the intense violence of meekness, the most ferocious spiritual force of all. This is the power to do nothing when you have the power to do everything.