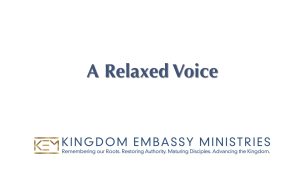 I could not think of a better way to introduce this subject than to pepper you with a spray of soundbites. Generally I am against Christian one-hit-wonders, or should I say one-verse-wonders? But, this compilation of platinum singles really amalgamated like a precision missile strike.

Why have you deceived us? Because you did not ask counsel of the Lord. You fight and war, yet you do not have because you do not ask; you ask and do not receive, because you ask amiss. Then Joshua spoke to the Lord; ‘sun, stand still,’ and the Lord heeded the voice of a man. Joshua took the whole land, according to all that the Lord had said; then the land rested from war. We are more than conquerors through Him who loves us. Come to Me and I will give you rest. Ask, and it will be given to you; seek, and you will find; knock, and it will be opened to you; everyone who asks receives and he who seeks finds, and to him who knocks it will be opened. If we ask anything according to His will, He hears us; and whatever we ask, we know that we have the petitions that we have asked of Him. If you ask anything in My name, I will do it. Whatever we ask we receive from Him, because we keep His commandments and do what is pleasing in His sight. You will say to this mountain, ‘Move from here to there,’ and it will move. Peace, be still! And the wind ceased. And most inspiring of all: “Lazarus, come forth! Loose him from those graveclothes, and let him go.” After that barrage you might be left wondering, “Who is foolish enough to not ask? And who is stubborn enough to not follow the strict guidelines of asking? In other words, what parameters ensure that asking is met with a favorable response?

The Bible is replete with examples of natural phenomena set on a collision course with the supernatural. Mountains get tossed into the sea; oceans separate; raging rivers hit invisible barriers; gale force winds cease; and the sun stands still in the sky, motionless, at the sound of a man’s voice. How does this happen? And could you duplicate such cataclysmic authority? Maybe you can and maybe you can’t, but one thing is for sure, you can’t unless you ask. So, we are left with just two options: do not ask the counsel of the Lord, or speak to the Lord and witness the sun stand still! I don’t know about you, but I will simply ask these two questions again.

“Who is foolish enough to not ask?” And, “Who is stubborn enough to not follow the strict guidelines of asking?” Oh, and when you do get around to asking, do it with a relaxed voice!