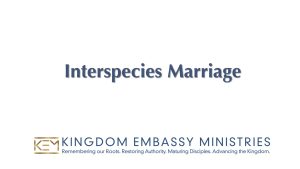 You feel like you’re all in. You use all the words and you sport the tidy little package called modern Christianity. You live in the world but are no longer part of the world, at least that’s the party line. Yet, you cannot overlook the obvious, you are here… “in the world.” It’s all around you; they are all around you. They live among you; that is an unavoidable fact. Among you, yes, but in you? That is the part that is completely optional.

There’s the rub; that is the choice. You are in the world, but is the world in you? The scriptures teach, nay they warn, do not intermarry—do not consummate with those who live among you who are not of you. If you do, they will get in you and you will get in them. It will be as if your thin fragile parchment became bonded with theirs, glued over every square inch to one another. Just try to separate them, to tear them one from the other, and all you will produce is fragments of both, still laminated together.

It only gets worse when one tampers with their witness. What might that look like? Oh, it’s likely much more common than you notice on any regular basis. Included in this species are all those who would swear that they are following the Lord. But, they’re not. And, you might not easily notice them because they work tirelessly to look good on the outside. Survival instincts prevail when animals are desperate to stay alive. This species will do anything necessary to appear like they are committed to the Lord, even though they happily consummate their relationship with the world daily.

Are you using your animal survival instincts to substitute a sin that is harder to recognize, for one that is obvious, just so you can remain undetected among those who care about sin? It’s just like sowing tares among the wheat. It’s all kosher on the packaging; it’s facon bacon. If you are hiding, only one question remains—are you simply struggling with sin, or do you not care? God has no problem dealing with your sin, as long as you do! It’s when you don’t struggle with your sin, when your sin does not bother you, that God’s anger burns. If you are wrestling against entanglements with the affairs of the world, tempted to carry a label that makes you appear right with God, like imitation crab, then there’s good news—when you are weak, He is strong. But, if you feel no regret or guilt about your sins and addictions, you may sadly discover that both pieces of parchment were cut from the same animal all along.