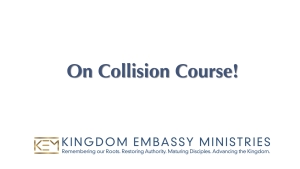 If I say “Law,” you most likely recoil. Humans don’t really like rules and regulations and laws. Let’s be honest, it’s much more instinctual to do what we want, to satisfy our own thoughts and desires, without being restricted and constricted by a set of parameters. Nobody wants to be told what to do, at least not naturally. It’s something we must grow into, before we can become good at it, if ever.

And to further complicate the matter, as Christians, we have been taught, for the better part of two thousand years, that Christ fulfilled all the requirements of the Law, thus relieving us of our obligation to be bothered with such legalism. In other words, the burden of obeying rules and regulations is covered by the blood of Jesus, and we are freed from any concern we might have about adhering to those outdated laws.

Furthermore, as a free religious people, we have engaged in every type of mental gymnastics to reconcile a few dozen verses in the Bible, to insure this “freed from the Law” theology would be propagated all throughout Christian history, and its now tens of thousands of denominations. Here is the slogan which best unites nearly all Christian brands: “Grace good; Law bad!”

And yet, if we peek just below the surface of this religion-wide theological treatise, we find it is built on very shaky ground, loose soil at best, and quicksand at worst. Disturb the ground a little and the whole house of cards crumbles, and fairly easily at that! Keep fighting and struggling to defend it, and you will be swallowed up in the soupy sand all around you. And still, Christians everywhere argue passionately to find loopholes to God’s commands, at every turn. I call it “Loophole Christianity.”

I often ask, “Why are you so intent on finding creative ways to not obey God? Why are you wrestling to figure out reasons to avoid doing what God requires? Was not Y’shua’s sacrifice enough to make you want to obey God, no matter what He asks of you? Why do you believe God’s desire was to free you from the requirement to obey a handful of Biblical laws after you were born-again, when every other law in the universe that God created still applies to you?” If you don’t think so, just toss yourself off a cliff and see what happens!

It’s really nuts; the one people group on the planet who should be racing to do whatever God asks, no matter what, is the same people group who fight and argue and search for every excuse to avoid doing so. Oh, we are very happy to comply with all sorts of other requirements, the ones our man-made denominations uploaded to the new-and-improved version of Christianity, But, obey the Laws of God, that’s legalism!

We are not going to dismantle every poorly parsed verse in the New Testament in this study, no. What we will do is recognize this. Y’shua made the standards much harder than any set of Laws written down by Moses. He has set our human nature on a collision course with the Kingdom of Heaven. Another way to look at it is this; He requires us to do every sort of thing that is the exact opposite of our human instincts. No, He did not, could not, change His Father’s commands; but He did do two things. He revealed what were the deeper and even more difficult requirements of His Father’s Laws, and then He empowered us to obey them! In other words, the cliff is much higher than you ever imagined, and when you fall off, He provides wings, and if your wings fail, a parachute. Oh, and it does not end there. After you hit bottom, you get free transport back to the top of the cliff, so you can try, try again.